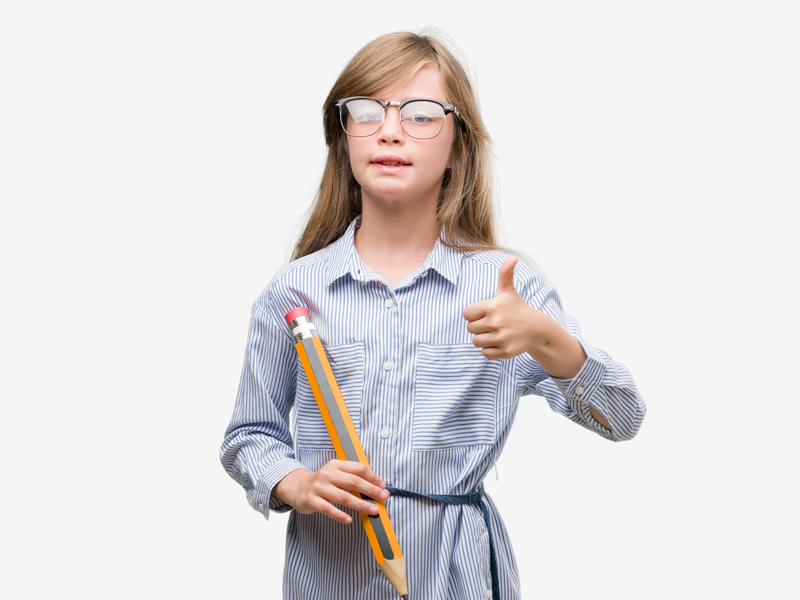 What is mixed dominance? (Cross Dominance)

As a child develops one side of the brain will become more dominant for motor activities. When this does not happen the brain operates less efficiently. This leads to more difficulty learning.

Most people have one side of their body more dominant than the other. For example, if a person is right-handed they will likely also be right eye dominant.

This is actually a sign of a well developed and well-balanced brain. Brains develop dominance for efficiency.

A mixed dominant person may exhibit "mixed handedness". Or they may be dominant in one hand but in the opposite eye (or foot). Dominance is not all on one side. It is mixed.

Someone with cross dominance may even switch dominance depending on the task. For example, they may write with the right hand but eat with the left hand.

There are many possible manifestations of mixed dominance. So it's easiest to understand as lacking a dominant side.

Children and Cross Dominance
Having a child who is mixed-handed may seems like a benign physical talent. But recent studies have found that it is associated with learning challenges.

Mixed-handed children are  "more likely to suffer from language and learning problems, such as attention-deficit/hyperactivity disorder (ADHD), than their right- or left-handed peers."

Where does cross dominance come from?

According to a 2009 study, cross dominance is likely the result of brains that are "imbalanced and not developing properly."

This is related to a concept called functional disconnection syndrome. FDS is a naturally occurring disconnect in the brain not related to any kind of trauma or surgery. The different hemispheres of brains with this syndrome don't communicate properly. Or sometimes not at the correct speed. this causes miscommunications and longer processing time.

FDS is thought to be caused when one side of the brain develops faster than the other.  It has been theorized as being the cause of autism and dyslexia. Early treatment is recommended.

Bilateral coordination exercises will balance the hemispheres and increase connectivity

A cross dominant brain seems to be an inefficient brain. Studies have shown a correlation between cross dominance and learning difficulties. Some theories state that this is due to less activity in the corpus callosum. the connection between brain hemispheres.

Practitioners have used and recommended cross-lateral exercises to correct this. Decades of practitioner use of the methods have shown benefits.

Information processing in the brain uses both hemispheres.

Without a strong connection, information processing is inefficient.   When information takes longer to process learning is a struggle. It may express as a developmental delay. Or a specific learning disability such as dyslexia or dyscalculia.

Mixed dominance causes the brain to be disorganized. With information and responses scattered over both sides. Think of it as a filing cabinet -- if it's organized well, in alphabetical order, it's easy to find a file. Files in a disorganized and unalphabetized cabinet will take much longer to find.

Neural pathways are less developed. So slower and less efficient.

Signs and symptoms of cross dominance

A 2010 study showed that children with mixed dominance are more likely to have language and scholastic issues. It also showed that they may have ADHD symptoms.

Cross dominance may affect the eyes. This could cause dyslexia symptoms.  They may confuse printed letters and words (b and d, saw and was).

This would affect reading comprehension.

In fact, cross dominance can explain many learning behaviors such as:

These skills rely on our spatial sense. Our spatial sense unites our senses. This is why proprioceptive exercises are so effective at treating this condition.

What to do with a cross dominant child?

Cross dominance isn't synonymous with ambidextrous. Ambidextrous is due to highly developing both sides. A dominant side is chosen first. Then the other side developed to match it.

Being cross dominant doesn't mean both sides are equally strong. It is more about a dominant side not being developed.

It does mean that someone with cross dominance has a uniquely built brain. This will likely result in unique strengths. So watch for them.

Cross lateral motions are extremely helpful for the cross dominant student. These are motions which build proprioception by crossing the midline of the body. This strengthens the corpus callosum. The connector between the brain hemispheres. This strengthening helps the brain work in a more integrated fashion.

The Learning Success System contains many cross lateral exercises. These will help the cross dominant student. It also includes exercises designed to help with the components of learning.

Increase your child's natural learning ability with the Learning Success System. Your child will enjoy better grades and increased confidence.

You will enjoy seeing your child succeed.